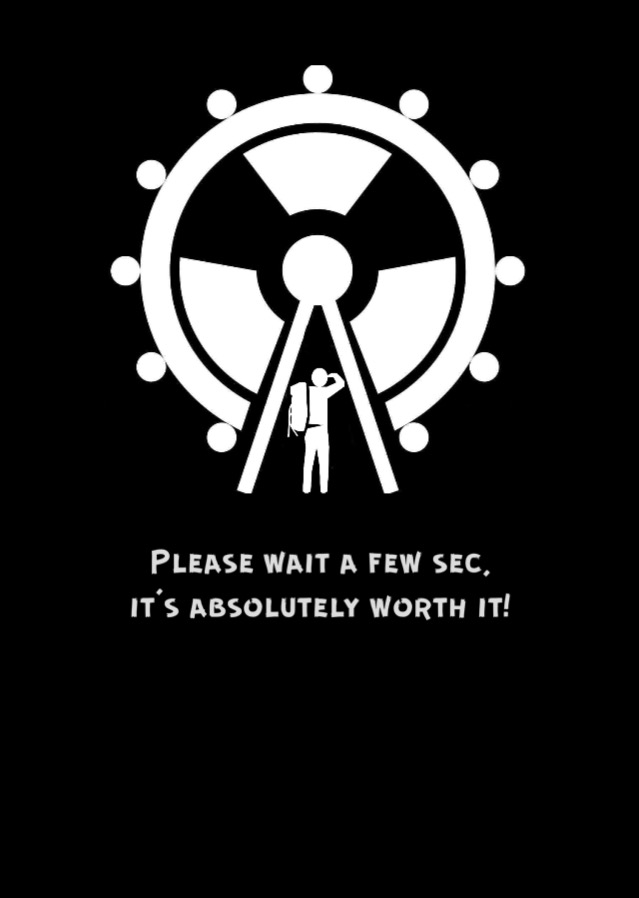 We had traversed 38 km of
Ukrainian territory:
roads, neglected trails, train tracks
and a river crossing made for a
painful and tiring, yet unforgettable
journey.

I arrived at the car park of a supermarket on the outskirts of Kiev. This was where the journey would begin, and it was here that I first met the other adventurous few that would accompany me for the next four days.

Five young Belgian friends were smoking and laughing, huddled around a newly erected monument of backpacks. Not long after adding my own pack, two Americans and their Czech friend, distinguished by thick accents and friendly introductions, finalised the attendee list. We bonded over unanswerable questions regarding the ambiguous details of the tour.

We were joined by two local Chernobyl explorers who were to eventually guide us into the Chernobyl Exclusion Zone. They dispensed what appeared to be Ukrainian army ration kits, which we made room for in our already overweight backpacks.

The sun was retreating over the horizon as we entered three old cars, and were driven to a direction somewhere North of Kiev. The night was well and truly established as six of us and our backpacks crammed into a repurposed Soviet-Police four wheel drive. The seemingly unstoppable machine had nearly no suspension the rear, and as we drove the cabin became tinted with the smell of whatever fuel the monstrosity gargled. The dim glow of village houses and passing cars were soon behind us. Faded headlights offered little in the way of detail, as we committed to the clearly neglected road. The long drive ended on an opening of a dirt road, adjacent to a stack of firewood.

Buzzed with the energy of having to trek through forbidden territory in a foreign land, we remained impervious to the cold rain and unforgiving darkness. The silence of the forest was only interrupted by the thick Ukrainian accent of our guide's briefing: "If I say stop, we stop. If I say lights out, lights out. We need to be quiet, so not much talking okay?". Scattered nods of approval were the starting gun.

Rumours of what the trek was going to involve had been circulating since the group's initial meeting; 'a river crossing' and '13 km in one night' were gossipped by uncertain lips. None of us were acutely aware of what the walk would ultimately entail.

Long stretches of absolute silence, walking in total darkness guided only by the touch of concrete underfoot, while our head-torches had to be hidden. Waiting for signals to run across roads, and hiding on the embankment as cars past us, unaware of our deviant presence.

10 hours and 58 minutes later, we had traversed 38 km of Ukrainian territory: roads, neglected trails, train tracks and a river crossing made for a painful and tiring, yet unforgettable journey.

And at 8:30 the next morning we finally got to the ghost city.

We stumbled into the 5th floor of an abandoned apartment building in Pripyat. The paint peeled walls and dust trodden floor of the apartment was no match for the fatigue of the sore-footed traveler.

We slept through the day until 6 pm. It was then we prepared to finally explore the remains of the city Pripyat, once again shielded by the cover of darkness. This is what we had come for; the opportunity to explore the decaying concrete of a forgotten city.

We entered the long abandoned Jupiter factory of Pripyat, the schools of now aged children and walked the empty streets of a Soviet municipality.


It was truly unforgettable. Guided by the harsh light of a head torch, water dripped from rusted pipes, rooms were lined with abandoned technology, computers from yesteryear, endless diagrams, books and Soviet propaganda posters enchanted the buildings with an essence incomparable.

The toys of Pripyat’s children remained on desks, and the toys of Pripyat’s men rusted in cold, damp darkness. Later, we sat on the roof of what was once a 16th floor building, high above the other Pripyat apartments. The distant spotlights illuminating the Chernobyl Nuclear Plant glowed with ominous luminosity.

At one stage when I was alone, I gently played a song from the soundtrack of a video game that was embedded in my own childhood. 'Fallout 3' is set in a post-apocalyptic world, and this world had now manifest itself before me. I am truly blessed to be able to live out a childhood dream, and I will never forget the feeling of being able to experience something so authentically.

We returned to our dusty accommodation. Ecstatic.

Next day we walked the streets of Pripyat in broad daylight.

The iconic amusement park of Pripyat was as monumental as I had imagined, as was the entirety of the city, now revealed by cosmic rays in absolute and decaying beauty.

Eventually our time was up. After resting and eating as many cans of unidentifiable Ukrainian army food as we could stomach, we backtracked through the night until we came upon a house in a small village, about 20 kilometers from Pripyat and halfway to our ride home.

Walking the same path, the once hidden environment was now revealed to us by the light of day. Crumbling villages of the Chernobyl zone had succumbed to nature's steady reclaim. The beauty eased the pain of sore feet and tired legs.

By the end of my illegal Chernobyl journey with stalkers I had traversed 89.64 kilometers, took 122,517 steps and walked for 23 and a half hours, all to live out an image I had formulated as a child through a macabre obsession with post-apocalyptic video games, movies and books. It was a highlight of my life, and shall be cherished like memories of the child that dreamt it.